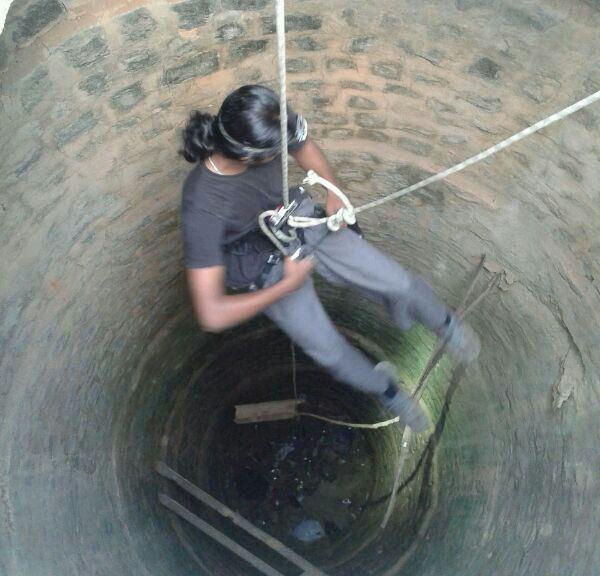 Urban development takes many shapes and forms. This true story locates itself in the construction site of an apartment complex that destroyed a five acre urban forest on Magadi Main Road. On these premises, existed an old dried up well that had become a dumpyard for medical waste from a nearby leprosy hospital.

The abrupt evacuation and consequent destruction of habitat puts any animal in a state of panic, a female cobra must have fallen into the well on account of this confusion. The fact that this took place during the peak cobra breeding season (pre-monsoon months), her pheromones attracted males from around the area, either way three more cobras ended up in the well.

The rescue efforts captured in the video below:

No action was taken during the initial few weeks that the snakes spent in this highly toxic environment surrounded by bloody cotton, used syringes, tablets. Instead they were ridiculed and used as a source of endless entertainment for those who lived in this area. Miscreants would gather around the well and throw stones and eggs at these helpless snakes just for the fun of it.

After a month, and by some miraculous grace of nature, this issue was brought to the notice of the Fire Department, who responded immediately. When at the scene, they lowered their ladder for a person to climb down. He barely reached halfway down the well before the toxic medical fumes had him struggling for air, leaving him nauseous. More rescue attempts were made.. but all in vain.

Time passed by and it was a month and a half later Sanjeev (Into the Wild’s chief herpetologist) I received the rescue call. These cobras had not only been living in a highly toxic environment for two months, but had also been tormented and were probably in a state of extreme distress, hunger, thirst and understandable agitation.

On entering the well, I was overwhelmed by a violent gag reflex to the medical fumes and needed fresh air immediately; I resurfaced puking and sick. I’m not someone who would easily give up on animals in serious danger, so I returned the next day backed by a team of (inter)national climbers – Shivu, Gangadhar and Gaurav – who created a safety net and rope system to belay me down roughly 60 feet to where the snakes were.

I successfully rescued three cobras, but despite multiple attempts, the last one proved to be a challenge. It was days later that the monsoon hit, filling the well with rainwater. Time to seize the moment! Securing the fourth and final cobra in a basket, I placed these snakes in the hands of one of Bangalore’s expert wildlife rehabilitators, Saleem Hameed who succeeded in bringing three cobras back from the brink of danger; surely a daunting task considering the hazardous conditions in that toxic well.

A week later, we were able to release the cobras nearby the rescue location.